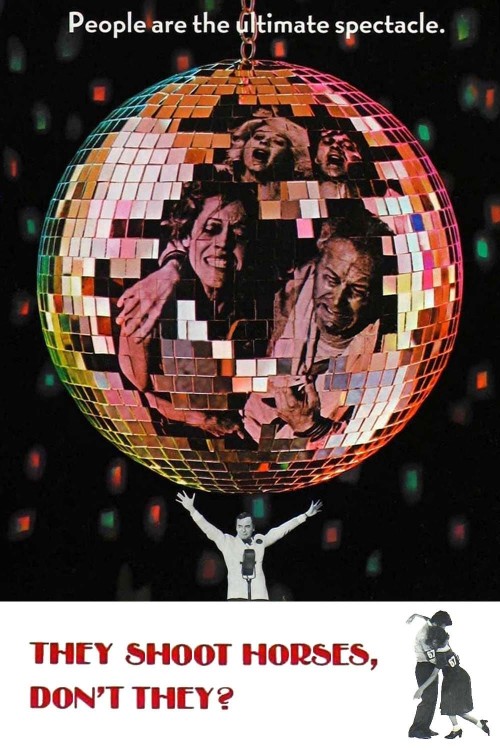 Get more information about They Shoot Horses, Don't They? (1969) on IMDb

Gloria is a young woman of the Depression. She has aged beyond her years and feels her life is hopeless, having been cheated and betrayed many times in her past. While recovering from a suicide attempt, she gets the idea from a movie magazine to head for Hollywood to make it as an actress. Robert is a desperate Hollywood citizen trying to become a director, never doubting he'll make it. Robert and Gloria meet and decide to enter a dance marathon, one of the crazes of the 1930's. The grueling dancing takes its toll on Gloria's already weakened spirit, and she tells Robert that she'd be better off dead, that her life is hopeless - all the while acting cruelly and bitterly, alienating those around her, trying to convince him to shoot her and put her out of her misery. After all, they shoot horses, don't they?

Joseph Kearny
Wildly acclaimed when released and nominated for 9 Academy Awards, this film has been unjustly forgotten. Unique and unforgettable with a superb ensemble cast. - @Thursday, August 23, 2018 6:11 PM
Cosmic Creepers
I don't know but the running man with Arnold Schwarzenegger came into my head when I watched this on TV recently. A kind of brutal film tbh! - @Friday, June 8, 2018 12:52 AM
LA Fresh Life
hands down the most depressing hard-to-watch downer of a movie I've ever seen - @Wednesday, March 7, 2018 3:16 AM
LibertyIsDead
Merica’ - @Friday, February 9, 2018 2:18 AM
playinthedark
An amazing, heartbreaking film, and one of the best American films of the latter part of the 20th Century. Harrowing, severe, and extreme from start to finish, but it's worth watching. - @Sunday, January 7, 2018 10:20 PM
Ted Bailey
Uplifting tale of the indomitable human spirit. Great ending with one human selflessly helping another. - @Wednesday, December 20, 2017 9:32 PM
Modalsoul
I've never seen this film but it's be heard much about it, I'm gonna do a blind blu Ray purchase when it's released in late September. - @Monday, August 7, 2017 10:17 PM
WalterRamjet HeroOfOurNation
i was going to watch this, but then found out that jane fonda was in it. pfft! - @Monday, August 7, 2017 12:38 AM
Anthony Williams
Such an amazing movie 🎥 about life. Be warned it's not for everybody and Fonda Sarizann and Young were so beautiful good. It in my opinion should have won more oscars on its release in 1969. - @Thursday, July 20, 2017 1:23 AM
Mojos Bigstick
I've only seen it once, but that was enough.  What an amazing film. - @Monday, April 10, 2017 2:46 PM
Super bee
man that trailer told yeah nothing - @Wednesday, February 15, 2017 4:51 AM
Caswell39A
Ah, the good ol' days when movies were made my artists and not by Focus Groups and demographs to sell toys to children and happy endings to keep everyone pacified,..don't be hater,..which means don't think on your own,.. follow the lemmings. - @Wednesday, November 23, 2016 10:11 PM
Greg Bray
love this movie. it really showed the gritty dirty ugly reality of the day. even the good looking women were dirty looking. I wonder if this influenced Fonda later on in her politics. also like how it didn't show the eventual winner like no one really wins in the end. - @Friday, September 16, 2016 8:02 AM
jack johnson
The scene where the old sailor (Red Buttons) dies from a heart attack is still harrowing today. - @Friday, September 9, 2016 5:09 PM
Tommy Scafidi
soon enough everyone will be here because of kevin abstract - @Saturday, March 5, 2016 12:46 AM
Lucas Quaresma
O livro é ótimo! Quero ver! - @Friday, January 22, 2016 11:14 PM
David Eddy
Maybe people ought to use the brain God gave them to realize that poverty and desperation is cruel and unusual punishment not a movie.  The Great Depression was cruel and unusual punishment of innocent people just like is happening NOW for millions of people. - @Saturday, October 24, 2015 5:55 PM
Andrew Silva
When they filmed that running race,  was that actually filmed inside of the carousel at the Santa Monica Pier?????? - @Thursday, August 20, 2015 8:38 AM
Loam Bart
Pure Capitalism. - @Wednesday, March 25, 2015 3:41 AM
Molly Hayward
As a human being with depression, I must say I've taken a lot of life lessons from the novel. Along side the obvious plot of the dance marathon, (which were fascinating phenomenons, I must say) I relate to Gloria so much. The idea of feeling your life slip out of your control until the point where.. there's no point if you don't get to where you want to be.. or where you can't see what you want anymore. Gloria gave it a shot, and she didn't manage it, and she got Robert to help her out. I feel the connection between me and this fictional character in my SOUL. And the way McCoy described it as the only time he had seen her smile was when he shot her? Yeah, I get it so completely. Poor Robert though. The trailer doesn't really reflect that bit of the novel much, but oh well, it was '63, who's gonna take my criticism now? Great, great, great novel though. - @Sunday, October 26, 2014 7:22 AM
travisandlisa1
It's so sad to think these Marathon Dances actually existed, and how desperate the poor contestants were... - @Thursday, September 18, 2014 7:45 PM
pup lover
Fantastic trailer as well. - @Saturday, May 3, 2014 1:37 AM
Gerard Martinez
Such a powerful movie. One of my all-time favorite films. - @Friday, September 6, 2013 3:40 AM